Paving Washington Streets at the Turn of the 20th Century 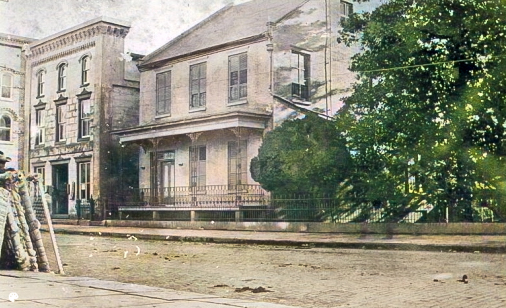 By 1890, the City of Washington had finally recovered from the economic disaster that was the Civil War. Maritime commerce was once again booming and two rail lines had brought their tracks to town. With easy access to northern markets, two oyster canneries were built in Washington to take advantage of the abundant local oysters. Each plant employed hundreds of shuckers working long hours for meager wages resulting in huge quantities of oyster shells.

What to do with the refuse? Pave the streets! Beginning in 1891, the city began layering Main Street and Market Street with the oyster shells. The burden of the horses, buggies, and wagons passing over the shells eventually crushed and packed the shells into a reasonably solid surface.

As I write this, contractors for the City of Washington are busy with a streetscape project. They are redoing underground utilities and creating a more “pedestrian-friendly” downtown. In the process, they are removing paving along Main Street. Having read that the streets in town were once paved in oyster shells, and later with brick, I thought I would take a look to see if any evidence remained below the surface of the old roadway.

It didn’t take long for me to find indications that the accounts were true. Lying alongside a deep hole dug at the intersection of Main and Market Streets were scattered whole and shattered oyster shells and paving bricks.

After doing a little “digging” online, I found the following quotes from news clips in old Washington papers mentioning the paving of the town streets:

“The city fathers have made a start towards shelling the streets, a good move and in the right direction. Market street with a shell bed from the river to the Cemetery would be the finest drive in the county.”

“Market street is being covered with oyster shells from the J. S. Farran & Co canning factory.”

In “Washington and the Pamlico,” several longtime residents remembered the time when oyster shell paved streets were common. One such resident, Pattie Baugham McMullan, is quoted as saying, “The elm trees made a lovely green arch and at that time paving consisted of ground oyster shells whose whiteness formed a lovely contrast to the greenery overhead.”

Numerous old paving bricks found in the debris piles demonstrated not only was the street once layered with oyster shells but later was paved with brick. The construction on-site crew stated that the intersection was the only location where the bricks and oyster shells have been found. The city had taken up the pavement in an earlier time to construct underground utilities and repave the streets thereby removing any remnants of the old paving.

By 1905, Washington was at its peak as a center of commerce for this part of the state. To accommodate the increased traffic that was generated by the expanding business downtown from travelers and residents alike, the city decided to improve the streets in the main part of town by using brick pavers.

In October 1905, The Washington Progress reported: “Work has begun on paving Main Street. The curbing being put down.”

By November 1905 that it was announced: “Main street looks quite different now from what it did a month ago. The paving has been finished and it now has the appearance of the main thoroughfare of some large city. The pavers are now at work on Market street.”

As construction continues downtown on the streetscape project, I will update you on any discoveries.

For information about the Streetscape Project, visit https://www.washingtonnc.gov/streetscape/