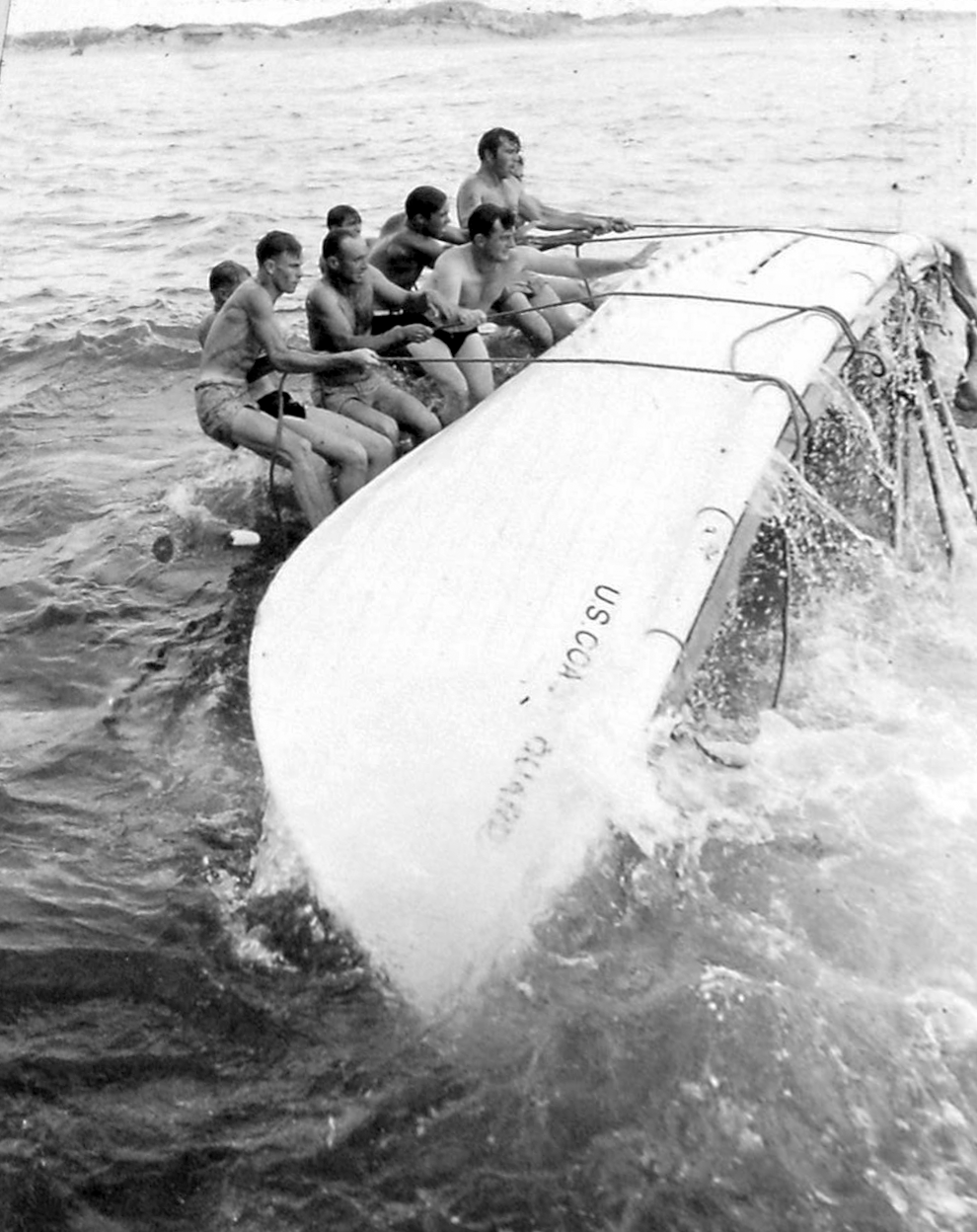 It may surprise you to know that the U. S. Coast Guard had a long tradition in the town of Washington, N. C. One of the first ten cutters of the U.S. Revenue Cutter Service, one of the predecessor services of the Coast Guard, was built on the Washington waterfront and launched in the summer of 1792. The cutter was named the Diligence and her first master was a gentleman by the name of William Cook. The light attendant station (known locally as the “buoy yard”) that stood on the southeast corner of Bridge and Main Streets was originally a facility of the U. S. Lighthouse Service, another service that merged with the Coast Guard in 1939. For many years tenders that maintained the lighthouses and aids to navigation on the Pamlico River and Sound were moored at this station.

On August 4, 1950, Coast Guard Day and the 160th birthday of the U. S. Coast Guard, Washington was host to an extravagant event celebrating the Coast Guard. Highlights included speeches by Mayor Dr. L. H. Swindell, Coast Guard Commandant Merlin O’Neill, and Washington native Congressman Herbert C. Bonner. Local guests included Edmund Harding, John Rodman, Wayland Sermons, and Ashley B. Futrell. To emphasize its capabilities, the Coast Guard performed several demonstrations including a rescue of a swimmer in the water by helicopter and the “touch and go” landing of a seaplane on the Pamlico River.

But the highlight of the day was a surfboat race among the crews of several Coast Guard Lifeboat Stations that was held off Washington Park. So popular was the event that it was reported that as many as 10,000 people were in attendance. Buoys were placed to mark off the course in the Pamlico River. Each crew consisted of a coxswain and eight oarsmen that had to row a 26-foot, 1800-pound surfboat ½ mile, capsize it, right it, and then row another ½ mile to complete the competition. The race was hotly contested with the winning crew from Fort Macon setting a winning record of eight minutes and 20 seconds. They were presented the coveted “Josephus Daniels Memorial Trophy,” named for distinguished Washington native and one time Secretary of the Navy as well as Ambassador to Mexico. During his career in Washington, D. C., Daniels was also a strong supporter of the Coast Guard. The crew from Virginia Beach came in second, less than two seconds behind the winners.

To bring Coast Guard Day to a festive finish, the Washington Spinster Club, a group of 100 local girls, held a dance in the American Legion Hut on Williamston Road for the more than 100 Coast Guardsmen that were in town. “After several opening dances to the music of Bob Jones and His Orchestra, Clyde Harrison called for three girl break numbers. Music varied from boogie to waltz.” states the Washington Daily News.

The U. S. Coast Guard continued to maintain a presence in Washington until 1966. Following Congressman Bonner’s death in 1965, the Light Attendant Station was decommissioned and the personnel and material were moved to Hobucken, N. C.